Aetherdynamic Power Systems, LLC is leading the market toward clean, 22nd century power systems. We are pleased to announce that we have successfully developed a new engine technology which generates electricity with zero emissions, using no fuel other than cheap, widely available fluids and an initial battery charge to produce energy, constantly, for years on end.

Over the next fifty years, 20 times more electrical power will be needed. Our technology can meet that demand while mitigating the effects of excess greenhouse gases and fossil fuel contamination. In the process, we aim to create jobs, income, tax revenues, and financial possibilities, spur the global economy, and increase the chances of sustainable and equitable global development toward an environmentally clean planet.

Others are building large wind-turbine and solar farms that consume large amounts of real estate. Though effective in some cases, the expense of the initial infrastructure often keeps the cost of Watt production high and without significant overall climate healing impact. These types of clean energy programs cannot compete against a product that can be housed in a relatively small box and uses essentially no outside fuel sources to operate.

We intend to work with existing utility power distribution infrastructure to get this technology up and running as soon as possible, gradually offsetting reliance on traditional methods and reducing their harmful effects. However, many places on this planet are not reachable by the current power grid system. We contend that new types of power facilities can be built using our technology that can provide clean power to these unincorporated areas.

Utility power is not the limit. Initially designed as a power source for aircraft, this turbine technology can be assembled in several different sizes, from very large for electrical generation facilities to very small for use in vehicles. Bicycles, cars and trucks, drones and personal aircraft, could all feasibly draw their power from suitably sized air-turbine engines to create truly clean transportion. For now, we will start with a standard unit size and move on to other sizes as time and capital permit.

Feel free to contact us for more information or to get involved in our movement toward clean energy solutions.

The Recirculating Heat Pump Turbine (U.S. Patent No. 10,480,343 B1) utilizes the dynamic properties of a heated, compressed working fluid, typically humid air, to produce a constant energy output. The turbine implements a Carnot cycle with an efficiency of approximately 90%, using the surrounding air as its low-temperature reservoir.

Power is initially supplied by a lithium-ion battery, which runs an electric motor to compress the working fluid. Once the device has achieved the targeted rotational speed, the clean exhaust from the core turbine is salvaged to run the compressor, allowing the motor to be shut off until required. At the same time, the angular momentum of the drive-shaft is used to power attached DC generators.

A second battery is kept fully charged by the generators to create a continuous energy supply to the electric motor, which slowly drains the first battery as it supplements exhaust input to the compressor. Control circuits monitor pressure, heat, humidity, and other parameters, tweaking the operation of the components to maintain output throughout the lifetime of the device (estimated to be about 10 years). Maintenance is simple, consisting mostly of ensuring the batteries are functional and that the working fluid has enough moisture to power the device.

You can check out the patent for a more thorough explanation. Below is a model intended to give prospective users of the technology an overview of the components and their functions. This design is intended for generating clean utility power and is but one of many possible manifestations of the technology, which, as we have already discussed, can be modified for a variety of applications. 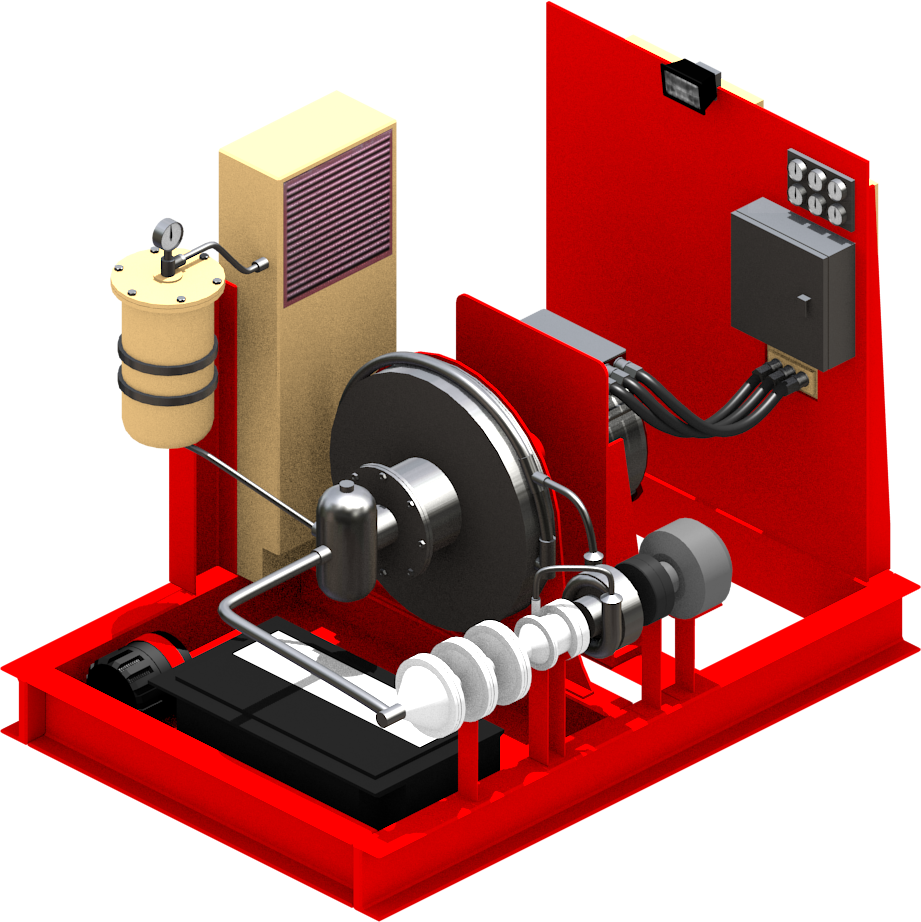 Please note that multiple configurations are possible. This design is subject to change for improvements on size, efficiency, output, etc.

The heat turbine works with a supercharger, turbocharger and clutched electric motor to spin a generator which provides power output. An attached atmospheric water generator collects moisture necessary for the heat turbine to operate. Panels on the rear of the device allow power to be harvested for use.

One of the many designs we have created for remote power solutions, this standard container contains an array of 18 heat pumps which create over 5 GigaWatts of output. The container can be shipped to disaster areas or project sites for emergency or short-term power generation.


The Aetherdynamic Power Systems Recirculating Heat Pump Turbine received a patent on 19 November 2019 (which you can view here). A working prototype is now in final stages of development, and production begins soon.

The era of Zero Emissions has arrived.

View an animation explaining the operation of the device.


Spinning Up the Core

The heart of the turbine which powers the DC generators is the core plate, shown here spinning at 4500 RPM during a stability test.


Special thanks to Bruce Eshelman of MBC Fabrication for his work on the prototype.

Email info@aetherdynamicpowersystemsllc.com to get involved

For over 20 years, Rod has successfully fostered companies from the ground up, helping innovators and entrepreneurs manifest their vision in today's complex business environment.

An accomplished design Drafter with experience in electrical, mechanical, and structural disciplines, Kim has over thirty years of experience in the oil industry. From 1982-2004 he operated an ultralight aircraft manufacturing facility which produced several hundred aircraft kits of various design. Seeing electric aviation on the horizon, Mr. Zorzi set out to devise a power system that could extend the range of these new aircraft, while recognizing the capacity of such a device to provide clean utility power.

A Certified Public Accountant and manager of several companies, Joe brings his decades of experience to the directorship of Aetherdynamic Power Systems.

Thanks for contacting us.

We will return your inquiry shortly.